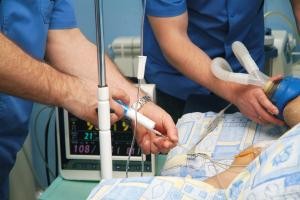 Rapid Opiate Detoxification first emerged in the 1980's. It's purpose was to speed up the recovery time of a hospitalized opiate addict. Initially, it was not administered with anesthesia but other more mild medications that reduced the unpleasant symptoms of withdrawal. It became utilized as a procedure across North America and an attractive detoxification option to opiate addicts, but the medical community as well as the addiction treatment community have mixed feelings about it.

The procedure involves heavily sedating the opiate addict and administering an opioid antagonist medication such as naltrexone. This detoxification process takes a few hours and is typically closely monitored by an anesthesiologist and nursing staff. When the procedure is over, some withdrawal symptoms will likely continue, but they are usually minor and can be treated symptomatically.

In the 30 years that Rapid Opiate Detoxification has been an option to patients, it has been sped up and advanced even further into Ultra Rapid Opiate Detoxification, which is the procedure that utilizes anesthesia. Implementing anesthesia into the process also implemented controversy because any procedure involving anesthesia is controversial. Anesthesia has proven to be very dangerous in many situations because when it is administered, it negates a person's natural physical reflexes that can mean the difference between life and death.

However, Rapid Opiate Detoxification and Ultra Rapid Opiate Detoxification have also proven to be a very beneficial option for many people. A number of people keep using opiates even after they have decided to quit them simply because the withdrawal symptoms are so severe. The ingested opiates attach themselves to proteins in the body called opioid receptors and put the person into a euphoric state. However, the build up of opiates in the body leads to a physical dependence on them, and when the body no longer receives them, it goes through withdrawal symptoms such as nausea, vomiting, mental confusion, constipation and increased heart rate. Typically, opiate withdrawal symptoms are non-life threatening, but there have been cases where withdrawal symptoms were so severe that they have sent people into fatal seizures.